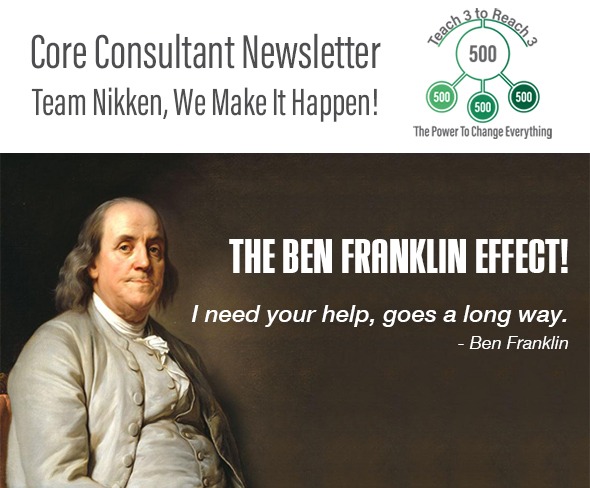 Success and happiness – nearly everything we may describe as the ‘abundant life’ is directly connected to the quality of our relationships with others. The business world is the world of people that’s all around us. If we don’t understand people, then quite simply, we do not understand business!

People do business with people who they know, like and trust. Never underestimate the value of being likable!

I’m reading a book by Rob Sperry, The Game of Networking. He states:

One of the easiest ways to make others feel important is to implement the little-known technique called “The Ben Franklin Effect.”  Ben Franklin said that those who do favors for us like us more… asking even your enemies to do a favor for you, it helps them to like you more. The phrase “I need your help, “goes a long way.

In his autobiography, Franklin explains how he dealt with the animosity of a rival legislator when he served in the Pennsylvania legislature in the 18th century:

Having heard that he had in his library a certain very scarce and curious book, I wrote a note to him, expressing my desire of perusing that book, and requesting he would do me the favor of lending it to me for a few days. He sent it immediately, and I returned it in about a week with another note, expressing strongly my sense of the favor. When we next met in the house, he spoke to me (which he had never done before), and with great civility; and he ever after manifested a readiness to serve me on all locations, so that we became great friends.

It is simple: ask someone for a favor and they will like you more. People like helping other people. People like being needed as long as you don’t take advantage of them by asking for too many favors. When someone does you a favor, there is magic to it.

When you ask someone to do a favor for you it is a compliment…so asking someone to do you a favor as a sign of respect. You are letting the person know that you like and respect him.

This is the most effective way to grow your business. Call people you already know who like you and trust you and ask them for a personal favor:

Hi Bill, I need your help, would you do me a personal favor?

Sure, what do you need?

Have you heard of the term ‘energy medicine?’ (Or grounding?)

They typically respond with: ‘A little bit’

I’m working with some non-medical technologies that were originally developed in Japan, and I want to get some personal experience with people who I know. This has to do with what almost everyone is interested in – having more strength and balance and energy – also this technology is amazing for natural relief of pain and discomfort… all without any side effects! Do you have 15 minutes this Thursday afternoon or anytime Saturday where we could meet up and do a few demos and see if you can tell the difference? Would you do that for me?

When you effectively connect with lots of people consistently, you will be able to do lots of presentations, and your business will GROW!

Have you watched What it takes?
Connecting with people requires vision, focus, passion and positivity! Ben shares how.