How I Raised Myself from Failure to Success in Selling 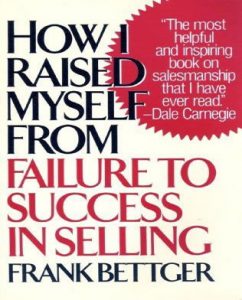 Frank Bettger unsuccessfully tried to sell Life Insurance. He’d given up all hope of ever being able to sell anything.

Not only was I discouraged; I was in the depths of despair…I had left some personal things at the insurance company office. So one morning I went back to get them. I expected to be there only a few mi

nutes, but while cleaning out my desk, the president of the company, Mr. Walter LeMar Talbot, and all of the salesmen came in to hold a meeting. I couldn’t leave without embarrassment, so I sat there and listened to several salesmen make talks. The more they talked, the more discouraged I got. They were talking about things I knew I couldn’t possibly do. Then I heard the president, Mr. Talbot, utter one sentence that has had a profound and lasting impact on my life. That sentence was this:

Gentlemen, after all, this business of selling narrows down to one thing – just one thing…seeing the people! Show me anyone of ordinary ability who will go out and earnestly tell their story to four or five people every day, and I will show you a person who just can’t help making good!

Well, that lifted me right out of my chair. I’d believe anything that Mr. Talbot said. Here was a man who had started working for the company when he was eleven years old; worked his way through every department; had actually been out on the street selling for several years. He knew what he was talking about. It was just as though the sun had suddenly burst out from the clouds. I made up my mind right then to take him at his word.

I said to myself, “Look here, Frank Bettger, you’ve got two good legs. You can go out and earnestly tell your story to four or five people every day; so you are going to make good – Mr. Talbot said so!”

My, but I was happy. What a great relief came over me-for I knew I was going to make good!

This was all just ten weeks before the end of the year. I decided during that time to keep a record of the number of calls I made to be sure that I did see at least four people every day. By keeping a record, I discovered that I could make a great many more calls. I also discovered that to average seeing four people every day, week after week, was a big job. It made me realize how few people I really had been seeing previously.

And so can YOU! Take Mr. Talbot at his word. See the people, lots of people…consistently! You are engaged in a business that centers on your ability to put names on a list, call them, and get them to meet you. (Ben has some great ideas about this: https://www.youtube.com/watch?v=pAK8va2EQS0&t=211s)

You can do this!