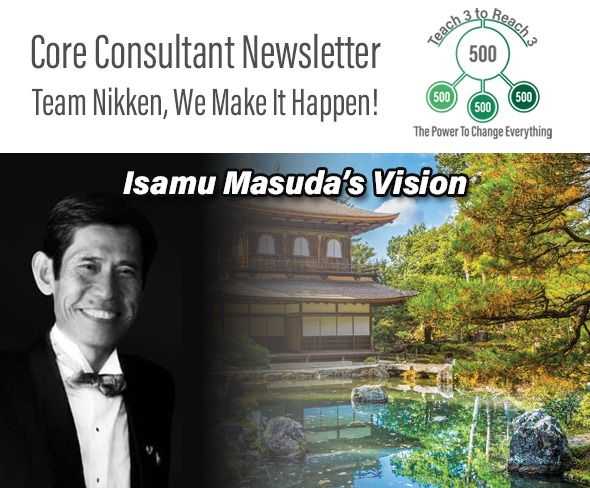 “You can have everything you want, if you live your life in balance.“  These simple yet profound words were not pronounced by a motivational speaker or a community leader. They were lovingly spoken by a struggling widow to her sickly son in post-war Japan. As young Isamu Masuda snuggled down to bed, his humble, hard-working mother would tenderly assure him that their impoverished conditions were not his destiny. In fact, the words of his mother changed not only his own life, but the lives of millions.

It took time for their true meaning to become a part of who he was. Masuda grew and, at 18, began working for a bus company, washing buses. It was the first of several unsatisfying and low-paying jobs that Masuda took in his search for something better. In time he met and married his wife Fumie, and the couple dreamed of a promising future. The birth of their first child changed their quiet, ordinary lives and devastated Masuda. His sweet baby boy was born with serious health defects.

Masuda could not help but examine his own life in his search for a reason his child might be born with such issues. He realized that he was not living his life in balance, devoting all of his energy to his family and his dead-end job, while neglecting his health and other aspects of his life. His own health had always been poor, but now his young son gave him greater reason to change what he had been doing. He knew that two areas of his life were greatly lacking – his finances to take care of his son’s medical needs, and the physical health of his family. He began to search for a way to strengthen these two aspects of his life. The answer he found was very unconventional, magnetic insoles for shoes.

Magnets had been used in Japan for thousands of years to support a healthy body, but Masuda had the innovative idea to use them in an insole that would stimulate reflexology points in the feet. Masuda believed in his idea, and began to sell his insoles door to door. They were a success, and as people reported many health benefits, Masuda knew that he had something amazing to share. With hard work, wise partnerships, and a commitment now to helping not only his family, but others find health and balance, Nikken became one of Japan’s fastest growing companies in history.

Masuda wanted to share not only his products, but a way of life that would help others find the success and happiness he had found, and he developed and shared what became the “Five Pillars of Wellness”, namely, healthy mind, healthy body, healthy relationships, healthy finances, and healthy contributions. His own experiences filled him with compassion for others, and he became known not only for his business ideas but his empathy and love.

Isamu Masuda’s unique products have helped millions of people who struggled with their own health issues. His philosophy of a balanced life, taught to him by his determined mother, has shown many others how to reach their own dreams.

We invite you to join us with Larry and Pat Proffit, who knew Isamu Masuda even before he founded Nikken.  Learn about the amazing story of how Masuda created Nikken!

This Saturday Morning at 8 am pacific time